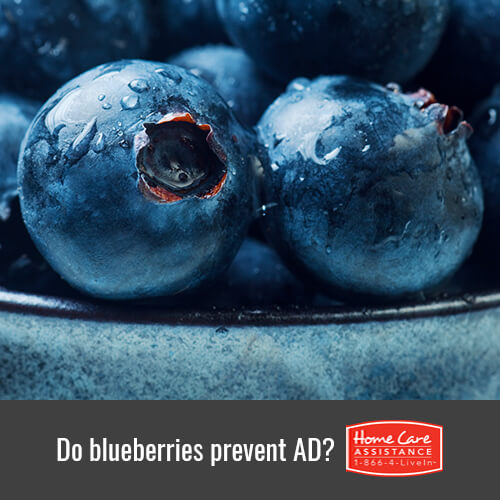 Chemical compounds in blueberries have been shown to reduce the risk of cardiovascular disease and cancer. However, the American Chemical Society recently reported that research reveals certain chemical compounds in blueberries that may also help in the fight against Alzheimer’s. The following details explain why Dallas Alzheimer’s caregivers should supplement their loved one’s diet with this super fruit.

Blueberries contain antioxidant compounds that inhibit the effects of free radicals, which contribute to the aging process and cellular damage. The berries also contain anthocyanin flavonoids. These chemical compounds have demonstrated the ability to improve cognitive function during studies performed using laboratory animals. A team of researchers from the University of Cincinnati Academic Health Center led by Dr. Robert Krikorian determined to evaluate the effects blueberries flavonoids might have on humans.

The first study involved 47 adult volunteers with a minimum age of 68. All of the participants exhibited symptoms of mild cognitive impairment and were considered to have a high risk for developing Alzheimer’s. The group was then divided in half. Half of the adults received daily doses of freeze-dried blueberry powder, which equals one cup of fresh blueberries. Meanwhile, the control group was given a placebo. After 16 weeks, the blueberry group had measurable improvement in language, concept, and memory skills. MRI studies indicated that previously affected areas of the brain also displayed increased brain activity.

A second study was conducted on 94 people aged between 62 and 80. Though the participants did not have observable cognitive difficulties, the subjects felt that their memories were declining. Researchers divided the volunteers into four separate groups who either received blueberry powder, fish oil, a combination of blueberry powder and fish oil, or a placebo. At the end of the study, individuals who received the blueberry supplement or the fish oil demonstrated slightly improved cognitive ability. Despite these developments, their memory skills were virtually unchanged.

Dr. Krikorian explained that the supplements might have greater potential in seniors exhibiting more advanced symptoms. The team plans to continue their research and report that future studies would involve volunteers in the 50 to 65 age group.

While there is no cure for Alzheimer’s disease, there are diets, medications, and even programs that may prevent or delay it. Home Care Assistance is a reliable home care agency Dallas seniors can trust to provide premier Alzheimer’s and dementia services in the comfort and familiarity of home. Not only do our compassionate caregivers work with our clients to establish healthy eating and exercise habits, but they also help seniors with cognitive disorders exercise and sharpen mental acuity to delay dementia symptoms. Call us at (214) 363-3400 today to learn more about our services and schedule a complimentary in-home consultation with a knowledgeable Care Manager.